Law firms anticipating growth as confidence in Argentina increases after $16.5m of sovereign debt is issued and government moves to reduce inflation and budget deficit

Argentina offers the best growth opportunities of all the Mercosur countries, according to a new study by The Latin American Lawyer, with significant activity expected in the country’s banking, finance and capital markets sectors.
A survey of lawyers in the Mercosur countries (Argentina, Brazil, Paraguay, Uruguay, Venezuela and Bolivia as an accession country) found that 55 per cent identified Argentina as having the best opportunities for growth. Around one in four respondents (27 per cent) said Brazil had the most promising prospects, while 15 per cent thought Paraguay led the way when it came to growth potential.
Confidence in Argentina is on the increase after the country reached a settlement with its “holdout creditors” that allowed it to return to international markets – in April, Argentina issued US$16.5 billion worth of sovereign debt. Meanwhile, it is also anticipated that the new government will take further measures to reduce inflation and the government’s budget deficit. This new-found confidence is backed up by M&A data. Two of the ten largest transactions in the Mercosur countries in the first quarter of 2016 took place in Argentina, according to Mergermarket, with Pampa Energia acquiring Petrobras’ Argentinean assets for $765 million, and the energy companies Empresa Distribuidora de Energia Norte and Empresa Distribuidora de Energia Sur being sold to a private investor for $220 million.

Private equity firms eye assets
Fernando Zoppi, partner at Argentinean law firm Pérez Alati, Grondona, Benites, Arntsen & Martínez de Hoz (h) , says there are significant opportunities for investors and law firms in Argentina, particularly in banking and finance, capital markets, corporate and infrastructure. He adds that most of the investment will come from the US where private equity firms and major banks are “eyeing Argentinean assets and the financial systems after so many years of no activity”.
The US used to be a major investor in Argentina, but this changed when the country’s former presidents Néstor Kirchner and Cristina Kirchner adopted policies that increased hostility towards the US and international investors. However, following the departure of the Kirchners, attitudes towards the US are softening in Argentina and this is fostering a more friendly environment for US businesses seeking to operate in the country. “We are just going back to business as usual and this will prompt US companies to come back and increase their presence here,” said one partner at an Argentinean law firm.
While Mergermarket figures show that the total value of deals concluded in the first quarter of 2016 has increased substantially when compared to the same period the previous year, there are warning signs that all is not rosy across the trading bloc. A total of 58 per cent of respondents to the survey said that political instability in member countries is the biggest risk to investment and trade in Mercosur. Two countries in particular are causing concern: Brazil, where the economy is nose-diving and the president Dilma Rousseff was recently impeached; and Venezuela, where political, social and economic turmoil has led to a degree of volatility that means no economic growth is anticipated.

Client demand increasing
However, despite the controversy surrounding Brazil’s president, many partners still feel the country has plenty of growth potential. Indeed, according to Mergermarket data, Brazil was home to 15 of the 20 biggest deals in Mercosur in the first quarter of 2016 – in the majority of the deals the acquisitions were made by international bidders. For Brazilian law firms, a more competitive environment for investors and an uptick in client demand for advice on compliance and anticorruption continues to generate substantial work. 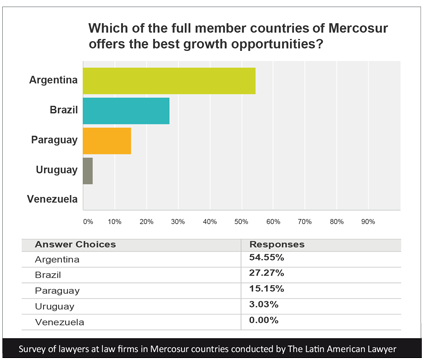 Elsewhere, it was noted that for Brazil, Mercosur does not offer any substantial opportunities at the moment. There is a perception, among some critics in the Brazilian business community, that the Mercosur trade treaty is skewed in favour of Argentina. “While it is true that Argentina is getting back in the game after a long period of stagnation, the set of existing safeguards within Mercosur in relation to Argentina has always put Brazil at a disadvantage,” said one participant.

The vast majority (85 per cent) of lawyers that participated in the survey expect demand for legal services in their countries to grow, with the key driver being M&A. Nearly half (48 per cent) of the respondents expect their firm’s revenue to grow by at least 5 per cent, with 18 per cent expecting growth of more than 10 per cent.

Meanwhile, the economic outlook for Paraguay is also positive. Jorge Figueredo, partner at Vouga Abogados says: “Foreign investors are now discovering the advantages of manufacturing in Paraguay [in order] to export to the Mercosur countries.” He adds there is also growth potential in the country’s infrastructure, environment and energy sectors. Hugo Berkemeyer, senior partner at Berkemeyer, underlined Paraguay´s growing role in Mercosur, pointing out that the country would benefit from consolidating as a services hub and industrial and commercial platform that compliments Brazil and Argentina, the two economic engines of the region. IL