Whether it´s energy sector deals in Mexico, M&A in Chile, or corruption cases in Brazil, the Latin American market is generating work for Iberian lawyers from a wide range of practice areas 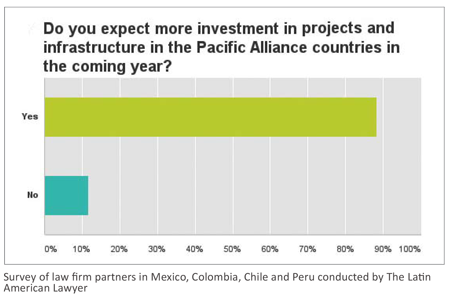 When it comes to providing opportunities for law firms, Latin America seems to offer something for everyone. While some countries offer the necessary stability to facilitate M&A transactions, others that may be plagued by political corruption for example, can provide rich pickings for firms’ arbitration practices. In addition, outbound investment from Latin America is also a potential source of work for Spanish law firms – indeed, lawyers argue that Spain could do considerably more to enhance its reputation as a gateway to Europe for Latin American investors.

Julio Veloso, partner at Broseta, argues that the Pacific Alliance countries are home to the most dynamic economies in the region, particularly now that the Brazilian market is stagnant. “Colombia is where the growth opportunities are,” he says. This is because, in the view of some lawyers, Mexico is relying on volatile sectors such as oil production, as well as on its links to the US. Meanwhile, Veloso agrees that Chile is the most stable economy in the region, but adds that the country is currently experiencing some political uncertainty that makes it less attractive to foreign investment. Elsewhere, a new pro-business president in Peru has engendered optimism among investors, according to Veloso. 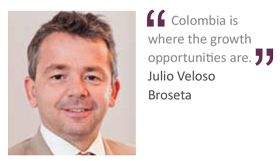 Mexico: Huge potential
Growth prospects in the Pacific Alliance are connected to the implementation of the Trans-Pacific Partnership (TPP), according to Luis Riesgo, partner-in-charge of the Latin America practice group at Jones Day. However, he warns that the outcome of the US elections in November will have an impact on trade deals between the regional blocs. “Mexico will greatly benefit from the TPP once everything is in place,” he concludes.
The efforts of the Mexican government to liberalise the energy sector in order to attract investment has been very positive, according to Ignacio Paz, co-head of Latin America at Herbert Smith Freehills. Though the energy reform has yet to bring the expected results, Paz says there was “no denying that the potential of Mexico is huge”. Paz is also cautiously optimistic about Colombia’s prospects: “The political situation remains difficult and the public-private partnership (PPP) law was approved some years ago and we are still waiting to see results.” Meanwhile, Paz says there is also some potential in the Chilean market: “It’s a stable, sophisticated and mature market where M&A opportunities are limited but interesting,” he says.

A number of law firms are paying particularly close attention to the Colombian and Mexican markets, according to Eversheds Nicea partner María Hernández. “Clearly there are opportunities in infrastructure, energy and compliance, particularly when you already have proven expertise in those fields,” she adds. Jose Maria Viñals, partner at Lupicinio International Law Firm, said he expects more privatisation, energy and infrastructure work in Colombia and Mexico. Meanwhile, Baker & McKenzie partner José Morán highlights the fact that US investment banks – including Goldman Sachs – have already made significant commitments to Colombian transportation projects.
Javier Villasante, partner at Cuatrecasas, Gonçalves Pereira argues that Mexico is the jewel in the crown of the Pacific Alliance. “The Pacific Alliance starts with Mexico, this is a country with a superior economy, it is close to the US and it has undertaken deep structural reforms in energy, telecommunications and electricity,” he says. Villasante draws parallels between the changes that have taken place in Mexico with the privatisation process that took place in several sectors in Spain in the 1990s. He adds that Spanish law firms that gained expertise when working on Spanish privatisations will be able to capitalise on the current opportunities in Mexico. Meanwhile, Uría Menéndez has identified energy projects in Mexico – as well as infrastructure projects in Colombia – as significant opportunities.

Wave of corruption
While there is considerable uncertainty in Brazil – due to the economy being in a tailspin, an impeached president and a wave of corruption scandals – there remain significant opportunities for law firms, according to Riesgo. He says that, while the flow of M&A deals may be drying up, there is currently high demand for advice on global investigations, compliance and corruption cases.
Raquel Florez, partner and co-head of Latin America at Freshfields, says the Petrobras scandal was a watershed moment in the fight against corruption in Brazil. However, she adds that the country has strong and resilient institutions and an independent judiciary, which, she says, bodes well for the future of Brazil. Florez says global investigations are generating work for many lawyers, adding that there are also many opportunities related to distressed assets.

Beyond the Pacific Alliance, lawyers say there are opportunities for investment in a number of other Latin American economies, provided the risk is properly managed. Meanwhile, Florez says arbitration has been a particularly active area in countries where “assets have been confiscated, such as Argentina and Venezuela, for example”. She adds: “Argentina is now attracting interest from our clients – there is an uptick of business confidence as a result of the new government.”

Argentina: Confidence will return
Even when undergoing difficult times, Argentina has provided law firms with fruitful opportunities in a range of sectors, including energy in particular, according to Javier Fernández Samaniego, partner at Bird & Bird. Veloso also predicts a brighter future for the country: “Argentina will rebuild the rule of law and the business confidence will return.”
The challenges faced by Argentina are not unusual, according to Veloso. “Most countries now have to work out their legal issues, put those new laws into practice and make all those planned projects move forward,” he says. Veloso warns that in certain countries, civil servants fear signing off projects because their predecessors are now in jail or pending trial after anti-corruption drives.

A number of smaller Latin American countries are also generating interest among international investors, according to Paz. “I see a lot of interest in Uruguay and Cuba,” he says. Paz adds that Latin America is attractive to law firms because of the balance in economic cycles across the region. “There are certain countries where the opportunities are plentiful for projects and M&A because the business climate is safe, and there are places where you go to do arbitration and to defend an investment when things go wrong,” he says. Law firms also have an opportunity to capitalise on Latin American investment coming to Europe, Paz says. “When economies take off, you notice outbound investment, not just in the region, but also in Europe and elsewhere – Spain is well placed to be a hub that channels Latin American investment towards Europe.” Veloso agrees that Spain can be a gateway to Europe, provided that law firms give “added value to those seeking opportunities”.

Spain: Gateway to Europe?
However, José María Viñals, partner at Lupicinio International Law Firm, says the role of Spain as a gateway for Latin American investment into continental Europe could be enhanced – particularly given the advent of Brexit – through the introduction of more business-friendly administrative and tax measures. He adds that law firms should also look for opportunities beyond the Pacific Alliance, in countries where there are challenges for international investors – Viñals says Spanish law firms are well placed to give valuable advice in such circumstances.
What strategies are law firms adopting in order to capitalise on such opportunities? Fausto Pérez Miura, partner at Pérez-Llorca, says his firm’s approach is to build a team “as if it were one single team, with the three to four best local independent firms” in the relevant country. Meanwhile, Veloso says clients of different sizes have different needs and therefore require different types of service. As one partner put it, “you need to understand your niche and make your strategy work.”
Javier Mata, partner at Olleros Abogados, says that Latin America has a tumultuous history and that certain countries still have complicated political situations that impact on businesses and their legal advisors. However, he adds that, despite this environment, “larger law firms are more of a common sight in the region these days”. Mata says there are significant opportunities for law firms in the Caribbean countries, particularly Cuba and the Dominican Republic. He adds that, given the large size of Latin America, firms need to focus. He continues: “The Caribbean is our focus.” Meanwhile, Bolivia, Ecuador and Central America also harbour interesting opportunities, according to Veloso, with potential for inbound and outbound investment work, in particular.

Cuba: No rush to evolve
Viñals says his firm’s considerable experience in Cuba means the firm is able to “facilitate potential investments on the island and guide clients through the particularities of doing business there”. He adds that, under existing Cuban regulations, it is not possible to incorporate a foreign law firm in the country. 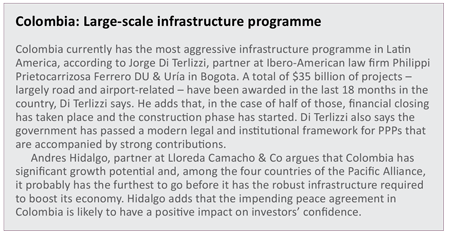 However, Viñals says his firm is continuing to search the market for instructions from foreign investors. Meanwhile, Olleros Abogados is keen to open an office in Cuba in order to capitalise on potential opportunities, according to Mata. However, the current system of compulsory partnerships with the Cuban state law firms makes it unrealistic. “The country will evolve, it’s unavoidable, but it will be done Cuban-style, with no rush,” Mata says.

Hernández is cautious with regard to Cuban opportunities for Spanish law firms. “The influence of the US is noticeable, they are way ahead of us in a number of markets,” she says. There are a number of opportunities for US investors in the Cuban telecoms and renewables sectors, according to law firm Hunton & Williams. However, Florez highlights the fact that US law firms are still prevented from doing business in Cuba and adds that interest in the country among international investors is increasing.