Despite fears that the election of Donald Trump as US president could do severe damage to Mexico’s economic prospects, the country is now seen as offering the best growth opportunities of all the Pacific Alliance countries

Mexico and Peru have overtaken Colombia as the markets in the Pacific Alliance that are perceived by lawyers as offering the best growth opportunities, according to a new study.
Research conducted by The Latin American Lawyer showed that more than a third (36 per cent) of lawyers consider Mexico as having the best potential for growth. This came as somewhat of a surprise given widespread concerns that Mexico will suffer the brunt of the changes that the US will make to trade policies following the election of Donald Trump as president.
However, some see this as an opportunity for Mexico to further integrate with its fellow Pacific Alliance countries as well as nations elsewhere. José Roberto Sáchica, partner at Sáchica & Sáchica Abogados in Colombia, says: “Mexico should give a push to the Pacific Alliance to weather the potential closure of its NAFTA market.” 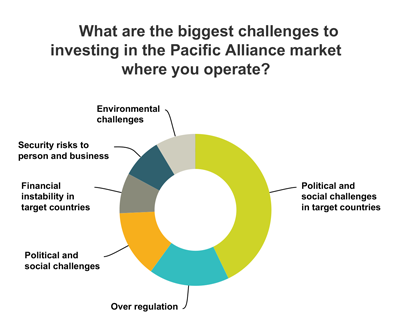 With regard to the growth potential of other Pacific Alliance countries, Colombia was chosen as the best bet by only 24 per cent of survey respondents – compared to 31 per cent in the corresponding research in 2015.
Peru was reckoned to have the most growth potential, according to 30 per cent of survey participants, while 12 per cent said Chile was their preferred choice. Lawyers at law firms in the US as well as in the Pacific Alliance (namely Mexico, Colombia, Peru and Chile) took part in the survey. “All the Pacific Alliance countries offer growth potential and they have been focused on counteracting low commodities prices for some time,” said Margarita Oliva, chair of the Latin finance practice in North America at Baker McKenzie. She adds: “Each country should use its best competitive advantage.”

The Trump effect
President Trump’s decision to withdraw the US from the TransPacific Partnership (a trade agreement which covered 12 countries in Asia and the Americas, including Chile, Mexico and Peru), as well as his protectionist rhetoric during his presidential campaign, has caused concern among lawyers in the Pacific Alliance. Over half of those surveyed (57 per cent) expect a “moderate impact” on trade matters pertaining to the Pacific Alliance countries. However, for some respondents, it is too early to assess the situation, while others view the current situation as an opportunity for the Pacific Alliance to boost internal trade. “This is the time to increase trade among the four countries”, according to Javier Castro, partner at Estudio Echecopar, a member firm of Baker McKenzie in Peru.
Meanwhile, Yves Hayaux du Tilly, partner at Mexican law firm Nader, Hayaux & Goebel, says: “It will have an immediate negative impact, but it will also have a medium to long-term positive impact on those countries that use the US withdrawal as an opportunity to expand into new markets.” 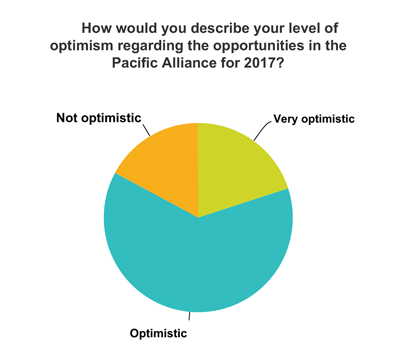 Jose Moran, chair of North American banking, finance and major projects at Baker McKenzie, says this new environment could lead to more progress towards the goals established by the Pacific Alliance member countries. “This will foster and assist the developments of the framework agreement,” he argues.
Meanwhile, Carlos Urrutia, senior partner at Brigard & Urrutia in Colombia sounds a note of caution: “There might be a decrease in capital flows to the region and, as a result, a slowdown in growth throughout – also, politics may be impacted by a burst of nationalism that might give rise to populist governments.” Nevertheless, Urrutia remains optimistic about future prospects for the alliance members, particularly in his native Colombia in the aftermath of the peace agreements. “Vast areas of the country that were virtually abandoned due to the armed conflict will be open to initiatives supported by the government,” he says. “In addition, Colombia is pursuing an ambitious infrastructure programme that will connect regions that were marginalised from economic development.”

Legal harmonisation
Alejandro Sainz, partner at Cervantes Sainz in Mexico, believes that new clients and growth opportunities will need to be targeted. He adds: “For law firms like ours, active in litigation and restructuring, when there is a downturn in the economy opportunities inevitably arise.” Daniel del Rio, senior partner at Basham, claims that Mexico remains a “key component for the global ambitions of international law firms and multinational companies”. 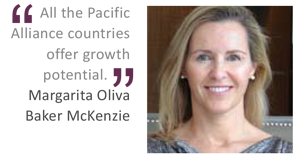 He continues: “The legal market remains highly competitive and, with the new challenges ahead, all law firms need to adapt, seeking alternatives and becoming more flexible in order to capture work in Mexico and beyond.”
Understanding the new political and commercial environment that will emerge due to recent changes will be a key challenge for law firms in the region, according to Oliva, while Moran underlines the need to harmonise different legal systems in order to facilitate legal advice across all the member countries. Alfredo Bullard, partner at Bullard Falla Ezcurra in Peru, says law firms in each country need to understand the culture and legal practices of the other members of the alliance. This sentiment is echoed by Javier Castro of Estudio Echecopar – member firm of Baker McKenzie, who argues that the countries in the alliance are becoming more investor-friendly.
Other challenges include the poor state of judicial systems throughout the region, which serve as a severe limitation on the Rule of Law, according to Urrutia. 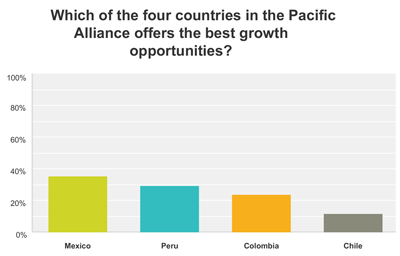 He adds that lawyers need to focus on improving the judiciary and make a concerted effort to improve the functioning of the courts. Urrutia also notes the growing trend for international law firms to set up offices in markets across the alliance.

‘First mover’ advantage
The Pacific Alliance countries attract more than 45 per cent of Latin America´s foreign direct investment and lawyers in the region remain optimistic that this trend will continue despite protectionist winds blowing from the US.
A total of 61 per cent of lawyers surveyed expressed optimism regarding opportunities in the region, with an additional 20 per cent saying they were “very optimistic”.
The majority of respondents, (73 per cent) said the Pacific Alliance offered growing opportunities in the area of projects and infrastructure, particularly in the energy, transport, and construction sectors. 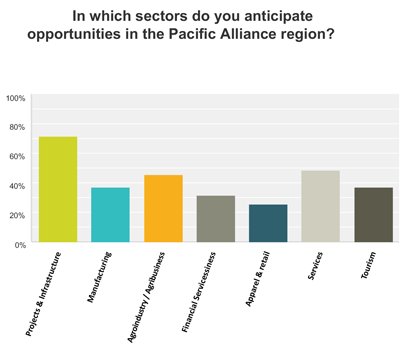 These findings are not surprising, as previous research has shown that all four countries are in need of infrastructure improvements. Other sectors providing significant opportunities include manufacturing and agribusiness.
Global law firms are no longer a rare sight across the region – CMS recently became the second (after Baker McKenzie) to have bases in all of the Pacific Alliance countries. Dentons, DLA Piper, Garrigues and Greenberg Traurig, to name just a few, are now vying for office space, talent and transactions with the home-grown law firms in Bogota, Lima, Mexico City and Santiago. According to Moran, many Wall Street and Magic Circle firms, in addition to international players, are increasing their presence in the region and are committed to Latin America as a growth area. He adds: “Law firms willing to take the ‘first mover’ market advantage could create the new rules of the game.”