A significant proportion of board members and directors are unaware of their obligations and responsibilities, and consequently need training in order to limit the risk of being investigated for misconduct, heard attendees at a recent event organised by The Latin American Lawyer in Bogota, Colombia.
The issue of raising awareness of the obligations of directors and board members was raised by Sergio Michelsen, partner at Brigard & Urrutia, at the session which was held in collaboration with Diligent. “Many board members and directors are not fully aware of their responsibilities so they need training, and also awareness,” he said. Michelsen added that there were a number of cases involving misconduct on the part of corporate boards, which served as an example of the action that needs to be taken. “Many board members need to be more diligent,” he said. Michelsen also hinted that board members pay could be a pertinent issue. “Compensation for board members, if any, is quite low compared to their growing responsibilities,” he said. 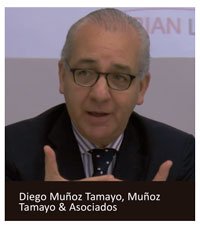 Other speakers at the event agreed that board members’ roles should be professionalised and ideally involve training in order for them to understand the concept of “duty of care”, as well as their position in relation to conflicts of interest and their social and personal responsibilities. Gustavo Sachica, head of legal at MetLife in Colombia, argued that the duty of the board is to be independent in order to give an impartial opinion, as well as understand the possible consequences of internal matters. “Raising awareness and more training can help achieve this independence,” he added.
The issue of the independence of international companies’ local in-house counsel, with regard to “raising red flags” in relation to compliance matters, was highlighted by Juan Camilo Castro, legal director of AT&T in Colombia. “It gets to the point where the in-house lawyer becomes less the counsel of the local operation and more the advisor of the corporate board at head office – company culture is key to respecting this independence,” he explained. 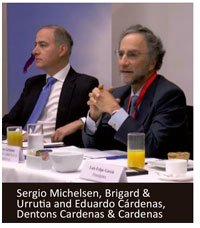 Being proactive
Eduardo Cardenas, partner at Dentons Cardenas & Cardenas in Colombia, warned that boards should not wait until a problem starts to take action. “Board members should be more proactive and be prepared,” he said. Meanwhile, Hernando Padilla, partner at Philippi Prietocarrizosa Ferrero DU & Uria, which hosted the event, added that it is often only when the regulators and investigators come calling that boards seek counsel. “Everyone should follow the regulations before the pain forces them to,” he said.
There should also be a clear distinction drawn between the role of a lawyer acting as a board member and the role of lawyers acting as external advisors to the board, attendees were told. That said, participants noted that it is not common for boards in Colombia to instruct external counsel. However, Clare Montgomery, an associate at Baker McKenzie in Colombia, maintained that external counsel could be more proactive in helping boards implement, and enforce, compliance and security. “External counsel have direct contact with shareholders, company owners, senior counsel at headquarters and board members, so that is the opportunity to emphasise how important it is to take internal compliance protocols seriously,” she said.

Shareholder activism
Michelsen highlighted the growing trend for private equity investors to stipulate stricter governance protocols at target companies in Colombia. “Some investors have learned their lesson the hard way so sometimes they tell the selling party that the company ‘looks great, the business plan is great but the corporate governance is not clear and transparent, so we won´t do it´.” Meanwhile, Padilla said corporate governance, the structure of the board and the requirements for implementing compliance are covered in shareholders’ agreements. “This makes for more transparent companies,” he added. Participants in the event also heard that shareholder activism is growing in Colombia and that it can be a catalyst for change when it comes to implementing good governance principles and adopting technology to manage risk. Procedures for protecting privacy and data when communicating at board level should be engrained in the company culture, attendees said. 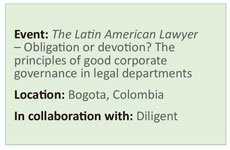